An overwhelming majority of Australians now believe that marriage equality – the ability of same-sex couples to marry – should be allowed in Australia.

– Crosby|Textor research shows strong support for marriage equality across all key demographics
– Free vote has over three-quarters support, including majority of those few opposed to reform

The results are part of the most up to date nation-wide telephone survey of 1,000 randomly selected Australians, in which attitudes towards allowing same-sex couples to legally marry were assessed.

The poll, commissioned by Australian Marriage Equality (AME) and conducted by Crosby|Textor in late June 2014, reveals strong and growing support for legalising same-sex marriages since this question was last asked in Nielsen’s 2013 poll.

Almost three-quarters of Australians (72%) now support legalising same-sex marriage, including around half (48%) ‘strongly supporting’ it. Just a fifth (21%) opposed this to any degree with those strongly opposed, a small and shrinking 14%. 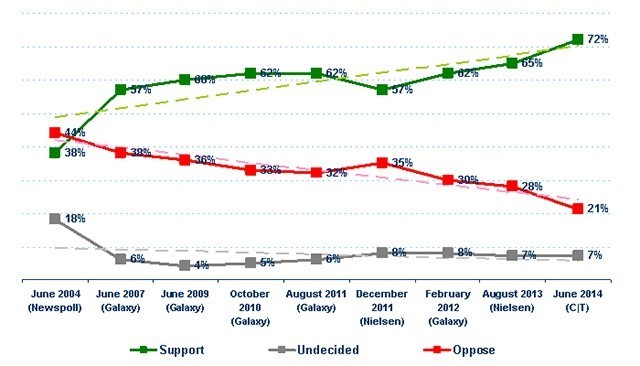 Comparing this to the other national telephone polls conducted over the last decade there is a clear and steady upward trend in support. This latest poll shows the highest level of support and lowest levels of opposition ever recorded on this question.

The national director of Australian Marriage Equality, Rodney Croome, said, “With Australians across all key demographics supporting marriage equality in record numbers, it’s fair to say the public has made up its mind, the community debate is over, and it’s time for politicians to act.”

“We will be using this landmark research to work with government members who have yet to declare support for reform to show them they have nothing to fear.”

“With Australians firmly behind marriage equality, it no longer needs to be a heated or divisive issue and can instead be one where people unite across the political spectrum to achieve reform.”

“It is also significant that support for marriage equality is now higher in Australia than in many other countries when they achieved the reform.”

Mark Textor of Crosby|Textor said, “The fact that nearly three-quarters of Australians support allowing gay couples to marry is exciting in itself – rarely do you get such a clear-cut endorsement. But the really exciting part for me is the long-term trend; support rising steadily from just 38% when Newspoll first posed the question a decade ago.”

“Support for same-sex marriage has doubled since 2004, and is still rising. The seismic shift in public attitudes towards marriage equality is undeniable. Almost everyone agrees that this is the right thing to do and there is no need to have a grand fight on this issue.”
The survey also asked a variety of demographic and lifestyle questions of the survey respondents; finding that more people in every single group surveyed supported than opposed same-sex marriage. Of particular note:

Mark Textor said, ‘This poll definitively puts pay to some of the myths that married couples or those with religious beliefs are against same-sex marriage. It doesn’t devalue their marriages or faith, and instead gives everyone equal access to the rights they are accorded’.
The same poll found that just over three-quarters (77%) also support a conscience vote on this issue, including a majority (61%) of those opposed to same-sex marriage.
Rodney Croome said; ‘Even a majority of those opposed to marriage equality agree that their elected members should be free to make their own decision rather than follow a party line. It’s time to let politicians do what the public clearly wants.”

For a news report on the survey results, click here.

————————————————————————————————–
Background Note: The research was conducted on behalf of AME by independent researchers Crosby|Textor amongst n=1,000 randomly selected Australian adults nation-wide between 12th – 22nd June 2014. The poll was conducted randomly by phone, used minimum geo-demographic quotas and weighting to ensure accuracy, and has a margin of error of +/-3.1%.