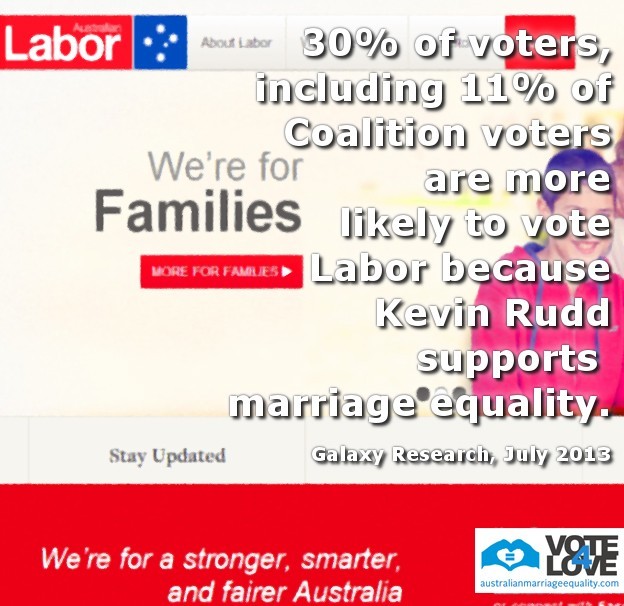 The poll of 1000 voters by Galaxy research has found Kevin Rudd’s support for marriage equality is drawing voters to the Labor Party, including large numbers of young people, while most voters feel Tony Abbott’s opposition to reform is out-of-step with community views.

The poll also found more Australians want the issue resolved by parliament than by a referendum.

“These polls results show that Kevin Rudd’s support for marriage equality is a net vote winner for Labor while Tony Abbott’s continued opposition, even to a conscience vote, is a vote loser for the Coalition.”

“In what looks set to be a tight election, marriage equality will be one of the major issues which decides the next Government.”

“The fact Australian’s want this issue resolved by parliament, not be a referendum, sends a clear message to Kevin Rudd to drop the idea and increases pressure on Tony Abbott to remove the main parliamentary barrier to reform by allowing a conscience vote.”

The Galaxy survey of found that 11% of Coalition voters and 54% of Green voters say they are more likely to vote Labor because of Kevin Rudd’s support for marriage equality, while only 6% of Labor voters said they are less likely.

Among 18 to 24 year olds, 54% were more likely to vote Labor because of Mr Rudd’s support for marriage equality.

Overall, 30% of voters are more likely to support Labor because of Mr Rudd’s stance, while only 19% are less likely.

On top of this, 58% of voters, including 37% of Coalition voters believe Coalition leader Tony Abbott is out-of-step with community attitudes by continuing to oppose both marriage equality and a conscience vote on the issue.

Meanwhile, on the contentious suggestion for a referendum on same-sex marriage, 47% of voters say they want parliament to resolve the issue while only 30% want it put to the people.

When the 23% of voters who are unsure about a referendum are evenly divided up, the proportion against a referendum is close to 60%

Australian Marriage Equality has consistently opposed a referendum on marriage equality saying it would become a platform for fear-mongering campaigns against the gay, lesbian, bisexual, transgender and intersex community.

For a copy of the Galaxy Research poll, click here.