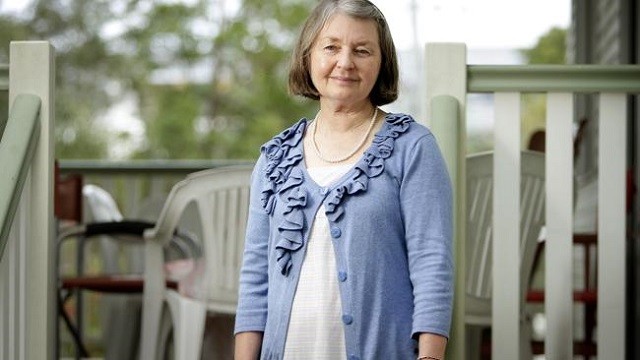 Loree Rudd – who says she is unlikely to help her brother on election day because she opposes his support for gay marriage – believes the maverick Russian leader’s hardline view on homosexuality is more enlightened than Western leaders.

“It’s like he (Putin) can see the problem ahead,” Ms Rudd, 62, who has just returned from a visit to Russia, said.

“I guess the bottom line, if there’s one thing I can say that can’t be challenged, it’s that society needs to protect its children as best they can.”

Ms Rudd, a nurse on Queensland’s Sunshine Coast who once trained as a nun, revealed her brother rang her before he decided to go public about his decision to support gay marriage.

“I don’t think I will do anything on election day,” she said.

At first she figured Mr Rudd might “stick me near a church to help out” on election day but now she fears handing out flyers in his Brisbane electorate will be “hypocritical”. 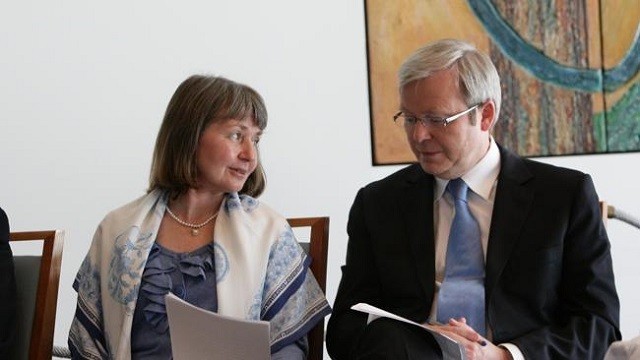 Ms Rudd said she was rarely able to catch up with the Prime Minister except for on her birthday and at family events.

She said her youngest brother was often too busy and most communication came in the form of regular text messages.

When he called her in May to say he had changed his mind on gay marriage, Ms Rudd told him she accepted his views but would not change her own.

Ms Rudd rejoined the Labor Party last year after angrily and publicly tearing-up her membership when the party voted to support a conscience vote on same-sex marriage at its national conference in 2011.

She has always refused to apologise for controversially describing some homosexual lobby groups as “the gay Gestapo” at the time.

She rejects being labelled as “cruel or nasty” and says she had always “mixed with (homosexuals) happily”, even “accidentally” dating a gay man when she was a student in her 20s.

“My view (on homosexuality) I can say with complete honesty has always been the same. I even dated one once, not knowing he was homosexual.”

It wasn’t until a decade later when she reflected on her ex-boyfriend and the male company he kept that Ms Rudd said she realised: “Oh my God, they were all practising homosexuals.”

Mr Rudd has said his decision to support gay marriage was triggered by the confession of a former political staffer that he was gay and would like to get married one day.

Ms Rudd said she respected gay people but would not change her stance.

“There’s nothing wrong with loving someone of the same sex. It’s normally called friendship. But when sex is involved in that (relationship), that’s a different thing,” she said.

“I’m not walking around saying these people can’t do what they want to do. Of course they can. (But) it’s the calling of it marriage that bothers people.”

A spokeswoman for the Prime Minister said he “respects the views of other people, including his sister”.

Australian Marriage Equality director Rodney Croome said the lobby group would campaign in key electorates in the lead up to the election for the Coalition to allow a conscience vote on same-sex marriage.

“I urge all supporters of equality to contact their local candidates and share their story about why marriage equality is important to them,” he said.

He said school students heard and read about same-sex relationships on a daily basis so it “would be absurd for teachers to pretend these relationships don’t exist”.

“Those who say there should be no discussion of homosexuality in school are not only living in the past, they are putting the lives of young gay, lesbian, bisexual and transgender people at risk by robbing them of the support they need to deal with the prejudice they too often encounter.”