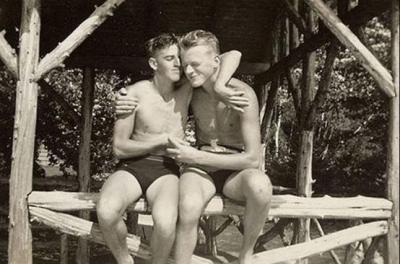 A newspaper article from 1932 has been uncovered that shows that gay men were seeking to marry each other in Australia as long ago as 80 years ago.

In an article in the tabloid The Arrow newspaper entitled ‘Wide Open Immorality,’ the newspaper’s writers describe a growing gay subculture with men marrying men and appeal for police action to halt the phenomenon.

‘The growth of the pervert population of Brisbane, beautiful capital of Queensland, is astounding, and in the last year hundreds of these queer semi-feminine men have made the city their headquarters,’ the newspaper wrote.

‘Now they have evolved into a cult, with two main sects, one on the north and the other on the south side of the town, with the river dividing them. And occasionally they meet at queer, indecent, degrading ceremonies when perverted lusts come into full play and shocking rituals are celebrated.

‘In the last two weeks there have been two ‘weddings’ — ghastly, horrifying spectacles of painted men and primping lads united in a sacrilegious blasphemy that they call the ‘bonds of matrimony.’’ the newspaper wrote.

‘They conduct these luridly immoral gatherings absolutely free from police interference. … Professional people have been invited as guests to witness the weddings — astounding revelation that perversion of this rotten type is so openly accepted in Brisbane. Nowhere else in the world — not even In Berlin, with its open homosexual clubs — is there the open boast that there are these ceremonies or the widespread extension of this sordid cult of male perversion. ‘

‘It is all conducted in these gatherings as if there were no ban on this horrifying indecency … This in Brisbane, in the year 1932 ! It is almost unbelievable.

The Arrow called for swift action against the city’s gay population.

‘The city is full of them, and more come from the other States regularly to swell the numbers,’ the newspaper wrote.

‘The nests of them should be cleaned out, and the whole of the horrid business scattered to the four winds. At present it is a scandal of evil almost unprecedented. Weddings between men, with city lights looking on and enjoying the ‘ceremonies,’ can only prove one thing — that Brisbane by tolerating them is earning for itself the name of the most wicked city in the Commonwealth. … Police action, speedily, please!